Ministries & Commissions » Living a Faith That Does Justice Award

Living a Faith That Does Justice Award 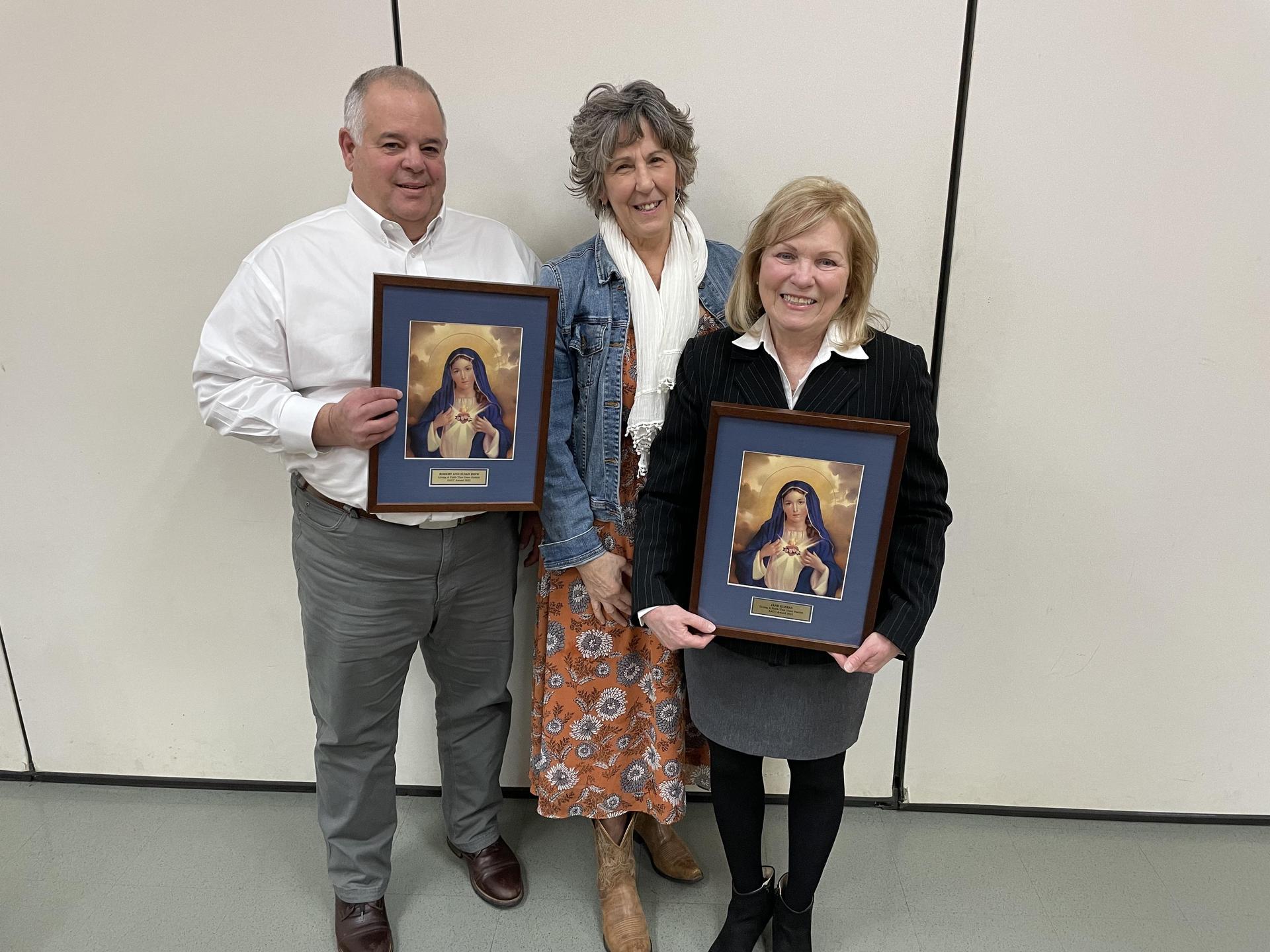 Since 2008, 13 IHM parishioners have received the award which was the idea of Carol Kelly who wanted to celebrate the individuals who worked for justice.  This year’s recipients are  Jane Elfers and Bob and Sue Bove.  The award was presented March 7.

Jane Elfers has been a member of IHM since 2007 and soon afterward agreed to chair our Respect Life committee.  She has initiated Lamb Layettes, Baby Prayer Blankets, 40 Days for Life Spring and Fall, Cemetery of the Innocents cross installation and added Baby Bottle Coin Collection to our existing Mother’s Day Baby Shower.  She also promotes Heartbeats for Life race and Cross the Bridge for Life.  Jane serves as a board member for Cincinnati Right to Life.  Jane and her husband Terry were married for 44 years before he died in 2012.  They had three sons and two granddaughters. The death of their oldest son, Douglas, inspired Jane’s dedication to the pro-life movement.  Jane received her master’s degree in curriculum and instruction and was involved in reform in Texas, revising testing practices for English as a Second Language.

Jane stated that her faith has been the foundation of her work in justice.  “I learned in Catholic school that whatever we do to the least of Jesus’ brothers, we do to Him.

My faith matured through tragedy and triumph. The death of our firstborn challenged me deeply, but with God’s grace led me to a profound sense of the communion of the saints. Douglas has walked with me in every positive step I have taken to end abortion.”

Sue and Bob Bove have been members of IHM parish for 36 years.  Sue has served on the Southeastern Ecumenical Ministry Legislative Board since 2009 and Bob since 2016.  SEM is an organization consisting of approximately 26 churches of 9 denominations in the Anderson, Mt. Washington and Milford areas.  It provides education on social issues and housing assistance and operates a choice food pantry.   Under their leadership and others, the SEM Food Pantry is now in its current location at 2020 Beechmont Avenue.  Bob serves as chair.  Sue and Bob began serving weekly meals at the Belterra Race Track in 2011 with friends and other parishioners and groups. They serve the back workers each Tuesday from 6-8 pm during the summer’s racing season, April through October.  Sue describes this ministry to be one of presence, walking beside individuals supporting mind, body and spirit with goods, meals, and Christian love.

Sue and Bob have been married 42 years and have 3 children and 8 grandchildren.  Sue, a nurse, has had a private case management company since 2012 serving the underserved and forgotten and complex medical cases.  Sue is also serving as an Inner Healing Prayer minister through Encounter Ministries and hopes to open a coffee shop incubator for community development of ecumenical Christians.  Bob owns a financial planning practice and is the head Ice Hockey coach at St. Xavier High school.  All of what they have accomplished has been done by working together.

IHM is blessed to have such dynamic leaders as Jane Elfers and Sue and Bob Bove.